Okay so before I get into the title of this post, let me just say that apparently if you’re going home for a graduation party, you, ah, don’t get to lounge with a book much?

I come to you many more tomatoes diced and strawberries sliced than I was last week, with an extra smidge of affection in my heart for Iowa, which is not at all where I was, but is where one of the books I read this week was set, and it made me think of another Iowa-set book that I have a lot of thoughts about so there’s a bonus book this week! And also I went looking for the Iowa state song and I’ve had it stuck in my head for an entire day now, in this surprisingly rich choral recording.

But first, a book that has nothing at all to do with Iowa!

Hey Ladies!: The Story of 8 Best Friends, 1 Year, and Way, Way Too Many Emails – Michelle Markowitz and Caroline Moss

So this was the book that would have been on last week’s post if not for the fact that it was a birthday present for someone (a friend who, upon reading the blog immediately texted me: “IS THE BIRTHDAY PRESENT FOR ME” sooo so much for my sneakiness). She now has her birthday present and I can rave to you all about this book that is SO GREAT that it is literally OUT OF STOCK on Amazon.com and [I’m pretty sure but won’t check] Barnes & Noble.

Once again, I must rage against the [temporary?] inaccessibility of The Toast, because that’s where this book has its roots [though they’ve made a few of the original posts available here]. [Ed. Jul. 2018 — THE TOAST IS BACK! Link to full Toast Hey Ladies archives here.] It started as a series cooked up by Markowitz and Moss diving into the hilarity and despair of planning just about any event — from a bachelorette party, to a Galentine’s Day brunch, to a simple game night. If you’ve ever been part of a wedding — your own or someone else’s — this book will probably bring you to tears, either of laughing or of flashbacks EITHER ONE.

On principle, I refuse to read this book in any other situation than at a poolside with a glass of prosecco, but as there was neither pool nor prosecco available to me when I read it, I settled for my own couch and shoveling plain tortilla chips into my mouth. Both are good. Also, Markowitz and Moss published a Royal Wedding version of the Hey Ladies emails here and it’s so much dang fun.

Our Lady of the Prairie – Thisbe Nissen 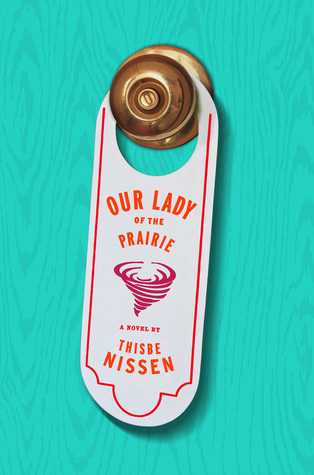 From the first pages of this book, my running thought was: “I love this, but have no idea why.”

Here begins Part I in today’s Iowa Book Musings: a novel about a U of I theater professor [I deeply love a character (and person) with an unironic love of musicals] whose life — marked mostly by worries over an unstable daughter — has finally stabilized: good husband, good job, engaged daughter. And then she goes on a guest teaching appointment in Ohio and falls in love and it all becomes…kind of a tornado.

AND THIS ALL HAPPENS IN THE FIRST CHAPTER.

And yet…nothing felt rushed or confusing, other than my own bafflement at my enjoyment of the book. I’m usually not into stories that are this — to use a bookish euphemism — “character-driven,” which in my unpopular opinion is usually code for “meandering plot.” And yet. Nissen’s writing magnetically pulled me along, fascinated with the characters and their interactions. Questions don’t get answered, characters dip in and out of significance in ways that usually drive me nuts, but instead I hung on every word. [Okay, maybe not EVERY word: the book takes a sharp left genre-turn for a long chapter that I wasn’t super into, but even when I think about it in the context of the whole book, it still WORKS and I don’t understand HOW.]

After the first chapter, I had honestly no idea what to expect, but I do expect to be thinking about this book for years and will probably revisit it multiple times, both in examination of Nissen’s craft and the simple enjoyment of her writing. Another point of interest: the book also includes Amish and former Amish characters in a way that’s somehow not fetishy or patronizing, which, as someone who grew up surrounded by Amish romance novels written by non-Amish Christians, was…very refreshing.

PLUS: when I googled Thisbe Nissen, I discovered that she looks EXACTLY the way I wish to look when I am her age and would, actually, be more than pleased to look like now.

Nissen’s book got me thinking again about another book set in Iowa that has stuck in my mind. Smiley’s book falls into that rare category of Concepts That Really Shouldn’t Work But Somehow Do: it’s King Lear, but set in 1970s Iowa farmland.

Just…take that in for a minute.

Smiley is a lifelong Iowa resident and she PROVES IT. My dad’s family is from Iowa and are mostly farmers. I’ve been back for Thanksgivings, and funerals, and July weeks of jumping across haybales and getting Casey’s pizza and listening to my aunts talk about their Bible studies and uncles talk about their tractors and Smiley absolutely captures the way people from Iowa talk. Not in a showy way; probably not in a way that people not from Iowa (or familiar with people from Iowa) would even notice. In fact, it’s my opinion that that’s why the movie adaptation absolutely flopped: not only was it written and directed by people not from Iowa, the Hollywood actors just were not capable of shaping their mouths around the cadences and vowels that Smiley gets on a MARROW-DEEP LEVEL. I mean, for cripes sake, you can’t bring in COLIN FIRTH and tell him to sound like he’s from Iowa and expect THAT to go well.

Her understanding of the importance of a potluck and the tensions that an unfair division of farmland can cause make this book rich and fascinating re-imagining of the Lear story. The book does, unfortunately suffer from a bit of a Third Act drag; it hits a climax a little over 2/3 through that might just have been so potent that the rest of the narrative couldn’t keep up. But anyway, I think about that book frequently, and if you’re interested in the cross-section of Iowa and Shakespeare, this is for you!

Have a good week and if you find a way to get that dang Iowa song out of your mind…let me know please.