…see what I did there? There is no other way for me to open this than with some hardcore, unabashed stanning of the movie that has shot pure life and glitter into my veins…Mamma Mia! Here We Go Again. JUDGE ME IF YOU WANT, I DON’T CARE, YOU AND THE RANDOM DUDE I DROVE BY WHILE SCREAM-SINGING ‘THE NAME OF THE GAME’ CAN FORM A CLUB OR SOMETHING. I guarantee you that once the clip of the ‘Dancing Queen’ sequence becomes available–in, you know, not a pirated way–I will be watching it on average 3 times a day, as it’s quickly become nearly tied with one of my favorite-ever feel-good dance numbers: the finale of Hart of Dixie, which convinced me that literally every TV show should end in a dance number of some sort. One of my favorite things about this movie [and its predecessor] is that everyone is clearly having the time of their damn lives and that energy just reaches out through the scenes and enfolds your heart [if you have one] and also here’s a really fun “review” of the movie at NPR.

Then We Came to the End – Joshua Ferris 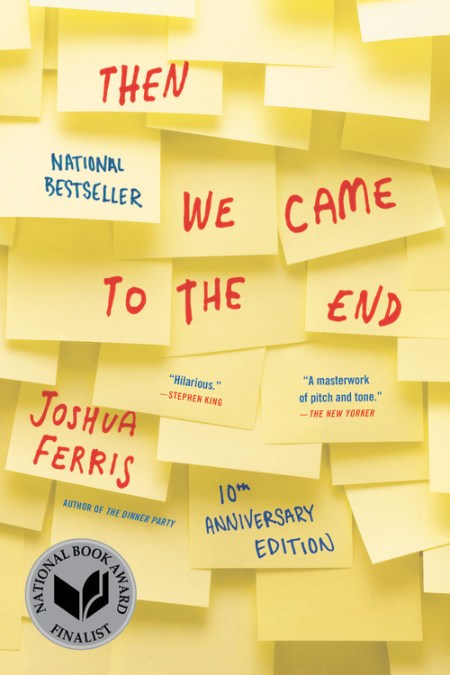 Have you ever kind of wished for a book version of The Office? Joshua Ferris has your back! Now, this isn’t literally a novelization of The Office*, and there are a few things that are tonally different. When I was telling some friends about it, someone asked if it’s funny, and the answer is yes, but it’s not a Funny Book. Like, it’s main purpose isn’t to make you laugh, but there is humor in the idiosyncrasies [whew look how fancy I am] of office life and Ferris enjoys diving into those.

One of the most interesting things about this book to me was the narrative structure: first person plural, which is not something you come across every day. At first I thought it was just a clever opening chapter, but he really sustained it for an entire book and I am imPRESSED. The book is about a group of “creatives” at an ad agency in the early 2000s as they face layoffs and personal tragedies and rampant office gossip. Because of the style, it’s a little tricky at first to figure out who everyone is and what makes them distinct, but in my opinion that just adds to Ferris’ exploration of uncertainties and half-fictions that a group can create, especially a group that spends 8 hours a day together 5 days a week. I feel like I’m making this book sound very difficult to read–it’s not! It’s very enjoyable and fun and would honestly probably be a good beach read, if you’re the kind of person that likes to read about work at the beach. Mostly when I talk about being impressed by writing styles, my impressed-ness comes from how effortless it feels to read it, even if you can see the complexity of what they’re doing.

One of the LEAST interesting things to me about this book was that the perspective, even though it tried to represent a [kind of] diverse group of people, was still very white-dude centric, which I don’t think is necessarily BAD–Joshua Ferris is a white dude and I would mostly rather he stayed in his lane, but it’s just not something I’m terribly interested in. Also, at the end of the book there was a list of books that he felt most influenced by, and…you guessed it…mostly white men, with a couple of white women sprinkled in. Which, if I’m being honest with myself…is complicated. Because I am a White Lady[TM] who moooostly has read other White Ladies. And I think partly it’s natural to gravitate towards the voices and experiences that you recognize yourself in. BUT [there’s always a but] it’s also necessary to examine that gravitation and examine the assumptions forming that gravitation. Also part of the delight of reading is getting into the perspectives of people with very different experiences from you. I read a whole bunch of “Dear America” books in elementary school, doesn’t mean we had the same experiences! Anyway, if you’ve been following me for any amount of time, you’ll know that everything I say has at least 7 caveats so thank you for following along.

[*sidebar: did anyone else read these Gilmore Girls novelizations and can anyone explain to me why they exist???] 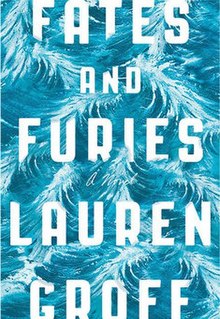 It’s actually really convenient that I also read this book this week, because a couple months ago Lauren Groff rocked Book Twitter by only citing female authors in this interview. [note: since it is a New York Times article, clicking on this list will remove one of your 4 free monthly articles unless you’re super fancy and have a subscription, so I just wanted to give you a heads up. But it’s a very good interview and you should read it if you can!] She also happens to name mention the importance of readers who “love passionately but who actively interrogate their own biases and tastes” which basically sums up what I was stumbling around in earlier but in a much more succinct way.

When it comes to talking about the book itself, I almost don’t know how to do it. This book ALSO had a unique narrative structure, and I was blown away by how Groff could literally tell you she was going to do something and you could still be blown away by what it turned into. The story is about the marriage of Lotto and Mathilde, two interesting, complicated people with an interesting, complicated marriage. Someday I’m sure I’ll reread this book and be blown away by how the perspective of the second half nearly entirely recasts the perspective of the first. It’s not quite a thriller, but it has the same kind of tense energy that keeps you pushing towards the middle, and its smaller, personal “reveals” somehow hit harder than an M. Night Shyamalan twist.

My one quibble with this book is that it has some not great Body Politics. The couple of nuggets of body-shaming here and there I reluctantly let slide because trying to force a mold of absolute correctness onto a story about flawed characters is rarely satisfying [though worth examining!], but when I’d finished the book I realized that there were some tropes about overweight people that I wish it had been above.

Lauren Groff has written several other things, including The Monsters of Templeton, which comes highly recommended from occasional counter-shouter Taylor, and most recently a short story collection called [and about] Florida. If you’ve read this book, or read it, please talk to me about it, because I’m still trying to process it and still blinking every couple of hours and going “oh THAT’S why that happened!!!” Actually, that goes for all the books I shout about here. Just talk to me about books! Or Mamma Mia!

One last Mamma Mia! thought before I abandon my desk to go sit on a beach chair and sip lemonade and actually read the twelvehundred books I’ve sent aside for a two day trip:

While “I’ve Been Waiting For You” was in no way objectively the best number in the movie, I defy you to listen to this song and tell me that it doesn’t sound almost exactly like a 90’s worship song. I’ll wait.