Sooo due to a confluence of accumulated procrastination*, the three books I finished this week are all…by white dudes. And they’re not just “books that happen to be by white dudes”, not that anything just “happens” to be written by the kind of person that it is, but there’s an extra level of white-dude-ish-ness in all of these books, and for that I truly apologize (especially to myself, because I had to read them). Most of my rancor is directed at one particular book in this stack, and I’m gonna try to keep it a LITTLE short today so that I don’t turn into a blathering zombie.

Everybody Lies: Big Data, New Data, and What the Internet Can Tell Us About Who We Really Are – Seth Stephens-Davidowitz 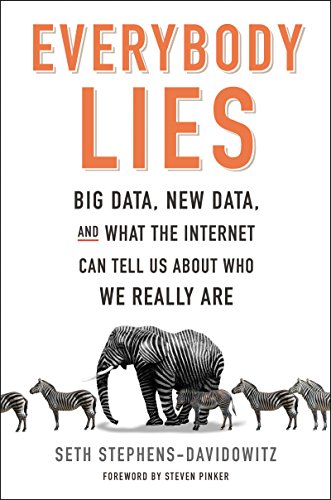 THIS IS IT. THIS IS THE ONE THAT I AM FILLED WITH RANCOR TOWARDS.

So I read this book for a Work Thing; I’m sure it will be sHoCkInG to those of you who have been following along that “Big Data”…is not among even my top 50 of interests. Stephens-Davidowitz’ Whole Thing(TM) is that he uses the Google Trends tool to try to figure out what the things we Google say about ~society~. So the book is kind of about understanding how data is and could be used, and kind of about how amazed he is that there’s still racism.

MY proposed subtitle for this book is: “What Men/White People/Cishet people Don’t Believe Unless They See It On A Chart.” So yeah his very first example is how search engine data could have accurately predicted the 2016 election if anyone had paid attention to it (also, he feels the need to write out the n-word like…a lot?) (Ed note.: upon some extra reflections, while I don’t at all want to give him a pass, his editor [who to the best of my information seems to be a white woman] also should not have allowed it.)

So basically he starts off with going “WOW WHO KNEW THERE WAS SO MUCH RACISM IN THE U.S.” and dude…lotsa people. Also: “WOW IT TURNS OUT THERE ARE A LOT OF WOMEN NOT SATISFIED IN THEIR SEX LIVES” as if…that’s not already an entire genre of memoir? Pretty much everything he was like “yeah DATA TOLD US THIS” I was like “yeah actually an entire field of study already told us this, but thanks for not caring about the humanities at all.” I think it could have actually been interesting if he had dug a little deeper into what it means that society tends to privilege “cold hard data” over lived experience and social study, butttt then he’d have to get into white supremacy, and patriarchy, and capitalism, and heteronormativity…and who could do THAT?

Safiya Umoja Noble could do that, in her book Algorithms of Oppression, which I’ve been reading as a follow-up/antidote. Her focus is slightly different [and style more academic], but the book is much much better and hopefully I’ll have finished it by next week!

Lord of the Rings: The Two Towers – J.R.R. Tolkien

You know this week’s really been a reach when the book with the least amount of white-dude-ish-ness is…Lord of the Rings.

I’ll be doing my second shout/countershout post with Sydney on this soon (first here), but some initial thoughts:

This is the second I’ve read for the Percy project I’m working on and let me just say…it’s rare for me to reach a book hating so many things about it with fervor while also loving several things about it this much.

The Second Coming actually follows-up with the protagonist from The Last Gentleman several decades later. To my great relief, this one is much less Holden Caulfield-y than the first one, largely because there’s a second protagonist: a young woman recently escaped from a psychiatric hospital…who, in many ways IS LITERALLY A BLANK SLATE FOR MR. WILLISTON BIBB BARRETT (yep that’s his forreal name) TO INTERACT WITH.

So yeah just straight off the bat, this book is

Anyway, there were some sections with really interesting writing that I enjoyed! I also liked that there was actually a plot this time, and some reflections that didn’t actually feel tired and annoying! I’m also wondering how much time I have to give myself a break before starting in on Love In the Ruins [which, sadly, is not a romance novel] [JK I would NOT want to read a romance novel by Walker Percy, the “romance” in this book was upsetting enough].

Okay well I’m gonna go think about my life. Here’s a picture of Gollum/Sméagol to express my feelings about this post (which definitely got longer than expected, because I *surprise surprise* like to rant):